Termite Species Information File
SCHEDORHINOTERMES
These termites can cause damage approaching the severity caused by Coptotermes. They build fragile nests in places such as old tree trumps, in timber buried in the ground, in filled patios and under fireplaces. The damage they cause is distinctive. Although it can be severe it is often patchy, with huge gouges taken out of sound timber, particularly around nails in floor boards or other timbers. Schedorhinotermes colonies contain major and minor soldiers and this can determine a size of a colony so we can manage or get an understanding on what damages may be inside a dwelling.
HETEROTERMES
​Heterotermes spp. Are a significant structural pest through Queensland, northern WA and the NT, in southern Australia where they are are believed to be a minor nuisance. They are generally considered to do little damage to timber in service, restricting their attention to weathered timber fences, decking and posts. Occasionally they can cause superficial damage to sound timber, but in my professional opinion they are still an aggressive species and must be managed.
Heterotermes are usually found in tree stumps or bases of posts but are not limited to any timber and sometimes are known to share nests with Coptotermes and Schedorhinotermes which i have seen.
COPTOTERMES
Coptotermes Acinaciformis is found throughout mainland Australia and causes more damage to property than any other species. It is aggressive in its search for food and will attack many items other than wood in its search for cellulose materials. It will damage wall lining boards, electrical wiring and even personal possessions. Colonies often nest in trees or stumps but can form nests without ground contact, in majority of inspections on sites i have seen mud moulds at the base of trees, bushes and grass, tapping these mounds will give an indication of a termite nest, treatment must be carried out for these nests and colonies can venture 50 to 80 meters.

There are several species of Nasutitermes which may damage timber in service. Soldier termites of these species are distinguished by their pointed heads. Nasutitermes exitiosus usually builds a low mound and is more common across Southern Australia. Nasutitermes walkeri builds part of its colony as a nest on the branch of a tree; the rest is constructed in the ground beneath it. This genus will mainly attack hardwood such as that found in fences and timber decking.
MASTOTERMES
Mastotermes darwiniensis, the Giant Northern Termite, is the most primitive of the commercially significant species. It shows an ability for sub-colonies to split from the main colony and produce queens, without a mating flight. Eventually a network of interconnecting sub-colonies is established, which makes control difficult. These large termites can devastate buildings, bridges, poles, trees and crops such as sugarcane. Mastotermes is found mainly north of the Tropic of Capricorn.
MICROTERMES
WEST INDIAN DRYWOOD TERMITE, Cryptotermes brevis
West Indian Drywood Termite Alert, if this species has been sighted contact Department of Primary Industries.
http://www.dpi.nsw.gov.au/__data/assets/pdf_file/0013/516100/Pest-Alert-West-Indian-drywood-termite.pdf 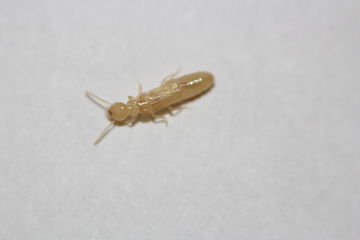